​A Postcard from Sherwood, the ‘Garden City Suburb’
200 years ago Sherwood was an area known as ‘the Lings’, largely covered by gorse and grass. There was only one dwelling, called Woodthorpe House, which has been used as Sherwood’s Community Centre for the last 70 years. It’s on Mansfield Road, and not to be confused with Woodthorpe Grange in the Park opposite.
Then, in 1825, following the lace-making boom in Nottingham, cottages were built for lace-makers, and substantial houses on Mansfield Road for lace manufacturers. You can see where the centre of the old village was by the narrow part of Marshall Street, where there’s an old filled in well, a blacksmith’s shop, cobbled road surface and, if you look up at the back of the shops on Mansfield Road, the wide windows put in to give maximum light for the lace-makers.
Nearby is the Sherwood Inn, which opened in 1846. It used to be well-known for its 6d (old pennies – 5p now) suppers when the Wilkinson family owned it. Where the Robin Hood pub is now there was a small Wesleyan Chapel in the mid-19th century, but they couldn’t get many ladies in full crinoline skirts in each pew, so they moved to a bigger building at the corner of Devon Drive, known by everyone as Top Chapel. There the Girls’ Choir used to broadcast in the 1920’s on radio station 5NG. St. Martin’s C of E church on Trevose Gardens opened in 1937, followed a couple of years later by the United Reformed Church on Edwards Lane.
Let’s take a stroll down Haydn Road. First, there’s PennhomeAlmshouses opened in 1877 for ladies of reduced circumstances who still had a bob or two. Sherwood was well endowed with almshouses – there’s also Cullen’s Court on Mansfield Road and Robinson’s, put up by Sir John Robinson, the founder of the Home Brewery.
Next we come to Haydn Primary School, which bears the date 1877 but which didn’t open till a year later. Opposite to the playground Sherwood’s first cinema opened in 1913. It was known as the Kinema, and the headmaster warned all the children of the dangers of moving pictures. It became Richard Stump’s clothing factory a few years after Sherwood’s other cinema, the Metropole, was opened in 1937 by Victor McLaglen, an old Hollywood film star. This closed in 1973 and the building was used as a bingo hall then supermarket until its demolition in 2006. There is now a modern gym on the site.
On Perry Road is Her Majesty’s Prison, Nottingham, known locally as ‘Baggy’ because it was originally called Bagthorpe Gaol when it opened in 1891. Fourteen murderers were hanged there between 1894 and 1928. The other ‘Baggy’ in Sherwood is – or was – Bagthorpe Workhouse, now part of the city Hospital complex off valley road. Not much of it is left, but you can still pick out the tower.
The first council houses in Nottingham were built in Sherwood. Between Valley Road and Mansfield Road is the Sherwood Estate, built just after the First World War, as Lloyd George said, for heroes, in ‘a fit country for heroes’. They also needed a pub so a large house at the corner of Edwards Lane and Mansfield road was converted into The Garden City Hotel (now The Sherwood Manor). Sherwood was then known as The Garden City Suburb.
Sherwood used to have two railway stations, the first in what is now Woodthorpe Park, where the two blocks of flats stand. That was on the Nottingham Suburban Railway, built in 1889 to serve the brickworks at Thorneywood and Mapperley, but also carrying passengers. You can still see where the line ran through Woodthorpe Park. New Basford Station on Haydn Road was on the Great Central line which ran from Victoria Station in Nottingham.
But the railways didn’t stand a chance after electric trams came to Sherwood on January 1st 1901. Passengers paid 3d on the train into Nottingham but only 2d on the trams, which were immediately very popular. Except, that is, with some of the older residents. Theor fears were reflected in the story about an old lady who asked the tram conductor if she would get an electric shock if she trod on the tram lines. ‘Not unless you put your other foot on the overhead wires’ he replied ‘then we’ll both have a shock!’.
Terry Fry 2019 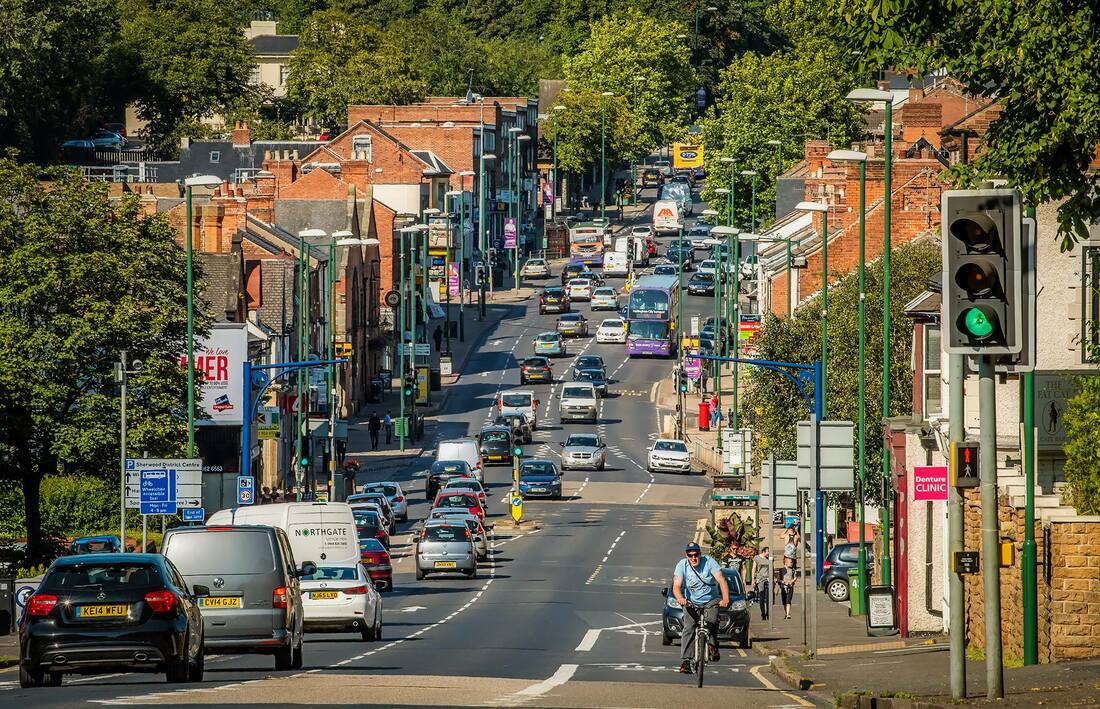 If this is your photograph please get in touch so that we can credit you!
Thanks to Andy Welch of A Room Full of Butterflies for the beautiful website